The Wolf Inside Me

How do you get inside the mind of a wolf? 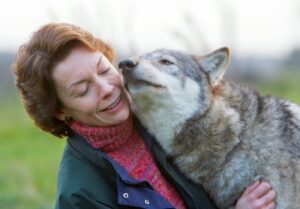 Since I was a child, I’ve read everything I could find about wolves, and the wolf talk which Torak uses is as close as I can get to real wolf talk.  For example, when he asks Wolf to play, or muzzle-grabs him when he’s a cub, that’s how a real wolf might invite play, or discipline a pesky cub. 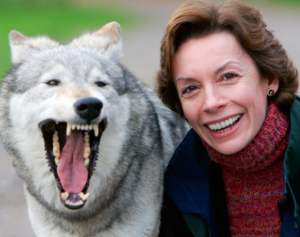 However as regards the language which Wolf himself uses in the parts of the story told from his point of view, I arrived at this by knowing something about how wolves perceive the world, and then imagining how Wolf would think and feel in a given situation.  In other words, I had to get inside Wolf’s mind: to experience the Forest through his eyes – and more importantly, through his nose and ears.

I got to know some real wolves

For instance at the start of WOLF BROTHER, I knew that when he first meets Torak, Wolf mistakes him for another wolf, because of the strip of wolf skin which Torak wears on his jerkin.  I realized that Wolf would regard Torak as a special kind of wolf – albeit a strange one, with complicated forepaws and the puzzling lack of a tail: hence Wolf’s name for him, “Tall Tailless”. 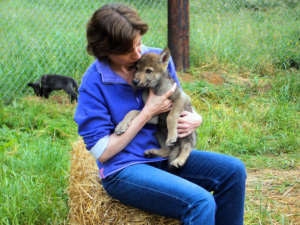 However, I always bear in mind that although Wolf can be endearing, particularly when he’s a cub, he is also an authentic wolf – and therefore, even to Torak, in some ways ultimately unknowable.

As with any research, you can only get you so far with books, and I would never have been able to bring Wolf truly alive if I hadn’t got to know some real wolves.  This I’ve done over the years by befriending the wolves at the UK Wolf Conservation Trust in Berkshire.  It’s been a privilege to get to know these wolves, and I’m hugely grateful to the Trust for helping to make this possible. 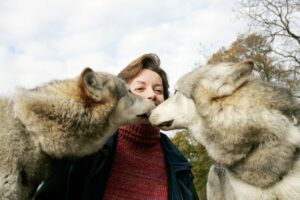 The wolves at the Trust are not wild, as they’ve been brought up from an early age in proximity with people (their devoted volunteer handlers).  However they aren’t tame, either, because you can’t tame a wolf, so you need to know a bit about wolf etiquette when you approach them: for instance, talking softly and reassuringly, not staring directly into their eyes, and not patting them on the head. 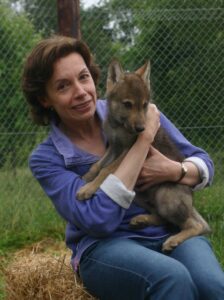 Over the years, I’ve got to know three wolves particularly well, as I’ve known them since they were tiny cubs (see OUTCAST research).  Over the years, I’ve watched Torak and his step-sisters Mai and Mosi grow from small bundles of fluff to big, happy, healthy wolves.  They’ve inspired me in so many ways: from the little things – as when I watched a wolf clean her teeth by running a bramble branch through her jaws – to bigger things, as when one of the wolves had to have the tip of her tail amputated, which gave me an idea for a major episode in SOUL EATER. 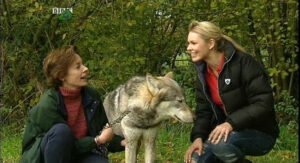 I’m honoured to be a Patron of the UK Wolf Conservation Trust, whose aims are:-