Torak's world is the world of six thousand years ago: after the Ice Age, and before farming reached his part of north-west Europe

The land is one vast Forest, peopled by small clans of hunter-gatherers.

They have no writing, no metals, and no wheel.  They don’t need them.  They’re superb survivors.  They know every tree and herb in the Forest.  They know how to make beautiful, deadly weapons from flint and bone.  They know the animals they hunt and they respect them, because without them they wouldn’t survive.

We know so little about the world of the Mesolithic hunter-gatherers.

What weapons did they use?  What shelters did they build?  For their material culture, I’ve studied archaeology, but to fill in the numerous gaps, I’ve taken ideas from the ways of life of more recent traditional people, such as certain Inuit and American Indian peoples, the San of Africa, the Ainu of Japan, the Sami of Lapland, and certain central and south American tribes.

Hunter-gatherers had to be experts about their world

The term `hunter-gatherer’ can be misleading, evoking a picture of someone casually spotting a clump of berries and saying, `Oh, good, I think I’ll gather some of those’.  In fact, hunter-gatherers had to be experts about their world.  They had to know precisely when particular plants bore fruit or nuts; when the bark of different trees was at its best for making rope, where such trees could be found, and so on.  They had to be unbelievably skilled.  It’s as far from The Flintstones as you could possibly imagine.

But Torak’s world is about more than tracking prey and scraping hides.

How did they think?  Again, I’ve learnt from more modern hunter-gatherers, and at the outset I was struck by key differences in attitude between them and farming or pastoral societies:-

As hunter-gatherers travel often, they don’t tend to value possessions as much as we do.

They often don’t have a concept of owning land.  This means they attach less importance to inheriting property, so there’s less emphasis on marriage, and women tend to play a more equal role in society.

They value the qualities you need for hunting: patience, resilience, and the ability to listen (hence Torak being “The Listener” in Wolf Brother).

Often they treat their weapon as a valued `hunting partner’, not just as an object (hence Renn and her bow).

What did they believe about life and death?

But that’s just the bare bones of a society.

What did they believe about life and death, and where they came from?  The challenge has been to create an entire belief system for the clans.  Again, I’ve borrowed from the beliefs of more recent hunter-gatherers, then used my imagination to adapt them for the stories.  For instance:-

When Torak tracks his first kill in Wolf Brother, I’ve based this on how the San (Bushmen) of the Kalahari track their prey, identifying so closely with it that in their imagination they become the animal they are tracking.

To show how Torak perceives his world, I’ve used the rather eerie Sami idea that everything – including rocks, rivers and trees – is alive and has a spirit; not all of them can talk, but all can hear and think.

In the books, when a hunter kills an animal, he feels honour-bound to use every part of that animal (whether it’s for food, clothing, weapons, or shelter).  This is because of “The Pact”: the clans’ belief in an ancient bargain between themselves and the World Spirit, to the effect that they must treat the prey with respect, and in return, the World Spirit will send more prey.  I based this on the beliefs of the Nunamiut Eskmimos of northern Canada.  Similar beliefs are held by many hunter-gatherer peoples.

Torak’s antagonists in the books, the evil Soul-Eaters, were inspired by reading about shamanism.

In most hunter-gatherer cultures, there’s one member of the clan who is in touch with the spirit world, and who goes into a trance to visit it: to cure sickness, foretell the future, and so on.  Such people are often called shamans or witch-doctors.  Mostly they do good; but it occurred to me that as they’re very powerful people, if they did ever band together to do evil, they’d be a force to be reckoned with.  That’s the idea behind the Soul-Eaters.  (As an aside, what I find really alarming about the Soul-Eaters is that they don’t believe they are doing evil; they’re just utterly convinced that they’re right.)

I’ve also drawn on shamanism, and particularly on the experiences of Inuit and American Indian shamans, for Torak’s “spirit walking” – that is, when two of his souls leave his body and enter the body of another creature, so that, while remaining Torak, he experiences life as they do.

Many readers have found the most frightening creatures in the stories to be the tokoroths, the evil children possessed by demons.  I based this idea on certain African beliefs about monstrous creatures believed to have been created by witch-doctors, using children abducted in infancy and brought up in darkness, in an atmosphere of deep evil.  In Malawi, where I was born, these are called tokoloshe.  I simply changed the name a bit and added a demon or two. 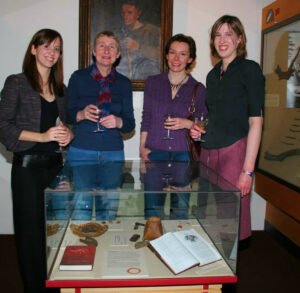 I’ve tried hard to make Torak’s world accurate, and I’ve been delighted that the stories have met with favour in archaeological circles.  A few years ago, I was asked to open a special Wolf Brother display case at the Cambridge University Museum of Archaeology and Anthropology.  The Museum had taken excerpts from the book, and exhibited them alongside real archaeological artefacts mentioned in the story, such as flint blades, red ochre, etc.  I was delighted that the book has been so honoured, and I’ve since been back to enjoy the Museum’s subsequent display cases for later books in the series.