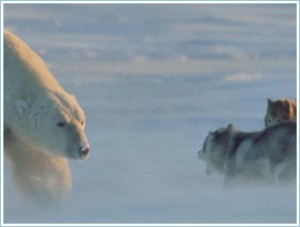 The Inuit name for the polar bear is Nanuq: the most feared and respected of all Arctic creatures.  And no wonder.  The polar bear is the largest land predator in the world, and an incredibly skilled hunter, equally at home on ice, mountain, or in the sea.  And unlike the grizzly or black bear, which usually leaves people alone if they behave themselves, polar bears quite naturally regard a solitary human being as prey…

When I was writing Soul Eater, I knew that Torak would encounter ice bears, so I needed to meet some too.  One of the best places to do that is the small settlement of Churchill, in Manitoba, northern Canada, where in early winter, polar bears gather to wait for the Hudson Bay to freeze over, so that they can go out and hunt seal.  Churchill just happens to be in their way.  Sometimes, the bears wander right into town.

As soon as I arrived in Churchill, I put on my winter gear and went for a walk.  The guest-house where I was staying is one of the last houses in town, and I was warned not to go out into the surrounding tundra, in case I met a bear.  It’s always best to heed local advice, especially when it concerns polar bears, so instead I headed down the broad, snowy main street, to the cawing of the ravens perched on the roofs.  Between the houses on either side, I glimpsed the open tundra on my left, the Hudson Bay on my right.  I headed down a side-road, hoping to dip my hand in the bay.  A large sign warned me back: POLAR BEAR ALERT – STOP! I decided to pay attention, and turned back.

Even in town, I knew that one could get unlucky and meet a bear, and I often saw a small truck bearing the logo “Polar Bear Patrol” crawling through town, keeping a lookout twenty-four hours a day.  I was also told that if worst came to worst and I did meet a bear, I should duck into the nearest house.  In Churchill, nobody locks their doors.  I learned, too, that the previous year, a curious bear had bashed down the front door of a house, to see what was inside.  Luckily, nobody was hurt.  In Churchill, most householders keep a loaded gun, for scaring off bears.

Night fell: a beautiful, crisp Arctic night, glittering with stars.  I really wanted to go for a solitary, moonlit walk, but I decided against it.  Which turned out to have been a good idea.  A little later, a polar bear got onto the balcony of my guest-house, and had to be chased away with shots fired into the air.

To get closer to polar bears without being eaten, I went out in what’s called a “tundra buggy”, which is like a large truck, but with an open-air viewing platform made of sturdy metal mesh stuck onto the back.  This platform is several feet above the snow, so that polar bears can’t jump up and eat occupants.

The first time we went out was at night, and the moon and headlights lit up the humped, snowy tundra for miles around – but no bears.  Then, as I stood on the open-air platform peering into the gloom, one of the “humps” about thirty feet away rose and ambled towards me.  What struck me most about the bear was its silence.  This enormous creature was walking across a crisp snow-crust – my hiking boots would have crunched loudly with every step – and yet his huge paws made not a sound.

In the days that followed, I watched bears by night – playing in the snow, or sleeping in the kelp at the edge of the bay – and by day: sparring, lounging, eating ice to keep cool (it was only -8’C, too warm for them!).  Most memorably of all, on one freezing, snowy afternoon, a young male wandered right under the grille of the platform on which I stood.  I knelt down.  He gazed up at me.  For a few heart-stopping minutes, we locked gazes.  I’ll never forget the look in those strangely innocent, dark eyes.

Oddly enough, though, my visit to Churchill wasn’t my only experience of polar bears.  I had another one, totally unplanned, while I was in Greenland, researching Spirit Walker.

It was summer, so the chances of any bears being about were supposed to be slim, as the pack-ice – on which the current sometimes carries bears down the east coast of Greenland – doesn’t generally take them as far as the tiny settlement where I was staying.  Having checked that it was OK to go out alone, I headed off for a hike.  I was about an hour’s walk from the settlement, stumbling along a stony trail through a barren yet beautiful valley which echoed with the cries of a falcon – when suddenly, far in the distance, I saw an unmistakeable white shape rise up on its hind legs and stretch its long neck to snuff the air.

It’s hard to get across just how frightened I was.  Suddenly, I wasn’t a novelist happily thinking of her characters.  I was a human being in deep trouble.  All the terror symptoms kicked in.  Dry mouth.  Thumping heart.  Time stretching.  Extraneous details falling away, so that all you can see or hear is the bear…

Strangely enough, though, my brain kept working.  It told me that I was downwind of the bear, so with luck, it hadn’t caught my scent.  It also told me to turn around and walk – walk – don’t run in case it’s seen you – back the way I’d come.

Either the bear hadn’t seen me, or else it wasn’t interested, because the next time I looked, it had dropped to all fours and ambled off.  But that lonely, stumbling, sweating walk back to the settlement was the longest I’ve ever experienced.  I can still remember every bend in the trail.