Ghosts In The High Arctic

"My aim in writing Dark Matter was simple - to scare the hell out of the reader..."

About a decade ago, I was reading a book on cosmology when the term “dark matter” leapt out at me. I knew at once that this would be my story’s title.

I knew at once this would be my story’s title

I also knew that it would be about a scientist at an isolated research station, who discovers that it’s haunted. But this was all I knew. I had no idea where the haunting would take place, or how it would end.

A few years after that, I was traveling by ship around Spitsbergen (or Svalbard, to give it its official name) : the icy group of islands far to the north of Norway, and only a few hundred miles from the North Pole. 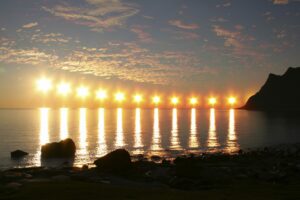 North of the Arctic Circle or south of the Antarctic Circle, the sun is visible for the full 24 hours around the summer solstice

It was summer, the time of the midnight sun. In that endless, eerie daylight, we explored lonely bays dotted with icebergs, and desolate promontories strewn with the giant ribs of whales. There was life up here – seabirds, seals, walruses, polar bears -but behind it I sensed a peculiar, unnerving stillness. Perhaps it was the presence of the land itself. Or the winter darkness waiting to return.

I was sure that one day, I’d write about this. But at the time, I was deep in my series about wolves and the Stone Age, so I just took lots of notes, and pushed Spitsbergen to the back of my mind.

Ghosts are stronger in the dark

A couple of winters later, I fell again to thinking about ghosts, as I often do during the dark months. That year in London there was hardly any snow, and I was badly missing the Arctic. That’s when it hit me. DARK MATTER would be a polar ghost story.

The implications were clear at once, and immediately frightening. Ghosts are stronger in the dark. They’re less threatening by day.   But what if you were in the Arctic? What if you found yourself alone, in the deep of the polar night, and dawn was four months away?

The skeleton of the story came swiftly once I had that pivotal idea. It would take place in 1937.     As war looms in Europe, a lonely young man called Jack seizes the chance to change his life, and volunteers to be the wireless operator on an Arctic expedition. Five men and eight huskies will camp for a year on an uninhabited bay on the remote north coast of Spitsbergen.

At first, all goes well. But as the midnight sun gives way to autumn, and then to the endless dark of the polar night, a series of mishaps means that Jack finds himself manning the base camp alone. And by now he has discovered that this isolated bay is not uninhabited. Something walks there, on the black beach among the bones…

My aim in writing DARK MATTER was simple: to scare the hell out of the reader. To do that, I knew it would be crucial to make the expedition feel absolutely real. Everything about it must be so convincing that the reader would think, “This could be me”. Then the haunting would be real, too.

Some of it I couldn’t possibly have made up

That’s why I based the expedition on one which actually took place, in 1935-6.  Much of the day-to-day detail – what they wore, what they ate, how they built their cabin and got on with their huskies – is based on the reports of this expedition. In fact, some of it I couldn’t possibly have made up. Who would have imagined that a group of twenty-something Oxbridge graduates would journey to the Arctic with a set of Crown Derby china, a gramophone, and several bottles of 1926 Heidsick Champagne?

Those doughty expeditioners weren’t the only ones to have overwintered on Spitsbergen in the 1930s. From the diaries of trappers who stuck it out for months in cramped cabins utterly cut off from the outside world, I’ve learned what it can do to a man (or woman) to suffer the loneliness and the ever-present threat of danger; to endure the extremes of the High Arctic: perpetual daylight in summer, perpetual darkness in winter.

But the accounts of others can only ever take you so far. 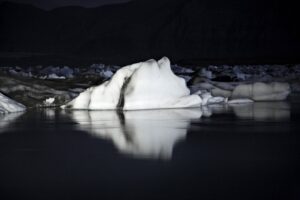 To make DARK MATTER truly come alive, I went back to Spitsbergen in winter, and experienced the polar night for myself. I went husky-sledging in the dark at ten degrees below zero, and snow-shoed up a glacier with only a headlamp to light my way. I felt the unease you experience on first entering a tiny, freezing, unlit cabin; unease which doesn’t entirely go away even when you’ve got your paraffin lamp safely lit. Because you can’t help wondering what’s outside, just beyond the reach of the light. 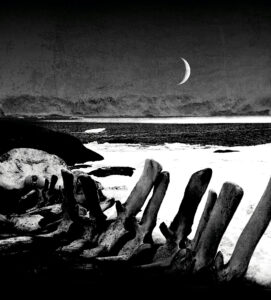 What’s looking in at you from the dark?

Above all, I experienced what it’s like to go crunching through the snow when there’s no moon and you haven’t got a torch; when the echoing scrape of your snowshoes can sound as if there were someone following you close behind. And when that dim grey shape which you can just make out a few paces away might be a reindeer, or a husky, or a polar bear.