In The Studio With Ian Mckellen 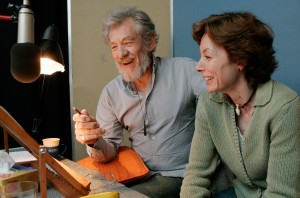 It was one of those amazingly lucky chances.  Just after I’d finished WOLF BROTHER, my agent was at a drinks party, where he encountered Ian McKellen.  They talked a bit about the book, a copy was subsequently sent round, and a few days later, Ian said he’d be interested in reading the audio book.  I was in Greenland researching SPIRIT WALKER when my agent contacted me with the news.  I was over the moon.

Originally, I was only going to be in the recording studio for an hour or so at the start, and ONLY if Ian didn’t mind.  But he very kindly took a nervous author in his stride, and of course I couldn’t tear myself away.  Since then, I’ve been lucky enough to be present for every day of every one of Ian’s recordings of the books.

It’s been such a treat to hear my stories being read by one of our greatest classical actors.  Ian reads with such feeling, such pace, such magical intensity.  And from the start, his approach to Wolf has always been so true, so wolf-like.  He plays Wolf straight, while somehow managing to get across the humour inherent in Wolf’s point of view.  And he always sounds exactly as Wolf did in my head, when I was writing each book.

We were incredibly lucky that Ian could find time to record every story, and none more so than GHOST HUNTER, because at the time, he was extremely busy in the theatre, performing in the acclaimed production of WAITING FOR GODOT.  We were resigned to having to wait, even though that would have seriously delayed the audiobook.  However, Ian extremely generously gave up his scant spare time to record GHOST HUNTER, so that CHRONICLES fans wouldn’t have to wait.

Often when I’ve been in the recording studio watching Ian perform, it has felt as if I’ve been watching one of the clan elders sitting around a campfire, telling a story to the rest of his clan.  This is exactly what I’ve been trying to do all along: create a sense that Torak’s story could be an ancient legend which has been lost for thousands of years, and only recently come to light… Ian truly is a twenty-first century Mage.