Michelle Recalls A Memorable Encounter In The Far North 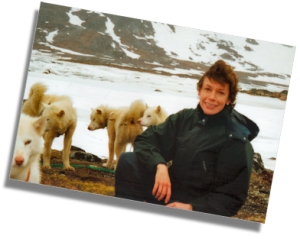 When I was writing Spirit Walker, I needed to immerse myself in Torak’s world.  So I went there.

To experience the Seal Islands, I travelled to the Lofoten islands of north-west Norway.  Like Torak, I went at Midsummer, which is a very strange time in the north, because it doesn’t get dark.  I found it unnerving to wander the hills and beaches at midnight in the blazing sun.  And it meant that when I came upon the locations for parts of the story – the Seal Clan camp, the lake, the little white beach, Renn’s camp – I saw them, quite literally, in a new light.  But that’s what happens when I’m on a research trip: I live the story with Torak, Renn and Wolf.  Sometimes, I even catch glimpses of them.

Like Torak, I was awed by the towering cliffs which rise straight out of the sea, with the white-tailed eagles wheeling overhead.  Like him, I was disoriented by the constant sunlight, and I missed the Forest.  And like Torak, Renn and Wolf, I got lost in the sea-mists which arise without warning, seeping eerily up the beaches to mingle with the clouds pouring down over the clifftops.

After the Lofotens, I went to Greenland, to learn traditional Inuit ways of survival.  I studied how the Inuit made their skinboats and shelters out of whalebone and seal-hide.  I learned about the Inuit medicine men and women, or angakkuk, who wore wide belts hung with bones, teeth, and seabirds’ beaks; this gave me the idea for Tenris’ magnificent belt.  And I learned, too, about gutskin: a beautiful, translucent material which until then I hadn’t known existed – and which also became part of the story. 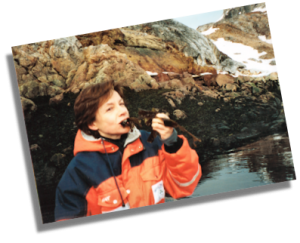 Since I knew that Torak would have to eat the Seal Clan’s unfamiliar food, I tried some, in the form of traditional Inuit food.  The mussels and seaweed plucked straight from the shore-side rocks were delicious.  And stewed seal meat was good, too; as was stone-fried whale meat.  But I have to say that I found raw seal blubber (ie fat) a bit of an effort to get down.  The same goes for mattak, which is raw whale skin with a lining of blubber: chewy, fatty, and slightly sweet.

Still, trying new things is part of research, and I just told myself that this is what many Greenlanders eat every day, and what Torak eats when he’s with the Seal Clan.  (And by the way, the whales and seals eaten in Greenland aren’t endangered species; they’re sustainably hunted, and the Greenlanders make use of the whole carcass, like the clans in Torak’s world.)

Of all the research, though, the most unforgettable was when I got close to the killer whales.

One of the best places for seeing killer whales is a remote Norwegian fjord, north of the Arctic circle.  It’s the second deepest fjord in Norway, and every year, at the start of winter, vast shoals of herring – millions of tons of them – come to shelter in it, closely followed by about seven hundred killer whales. 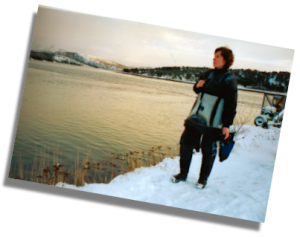 On the first day, I was lucky enough to watch the whales feeding in their unique “carousel” formation.  It’s eerie to watch, because at first all you can see is a big circle of water slowly turning pale green as the herring rise to the surface.  But you know that the whales are somewhere down below, driving the fish upwards.  Suddenly, the fish break the surface, in a doomed bid to escape.  The sea is boiling with fish, and now the sky is full of seagulls and eagles, and finally the great black fins of the killer whales surface…

That experience in itself would have been enough for me, but I had the chance to go further: to get into the water and swim with the whales.  And as Torak was going to be doing it, I knew that I had to do it, too.

It’s fair to say that I was a bit apprehensive, but I just told myself that these particular killer whales only went for herring, and I don’t look much like one, so the chances were, they wouldn’t bother me.  Besides, when the moment came, there wasn’t a lot of time for nerves.  We’d spotted a pod of killer whales feeding a short distance away, and followed it in our motorized rubber dinghy.  Suddenly the moment came, and so – in dry-suit and snorkel – I slid over the side of the dinghy.

With amazing speed, the current pulled me away from the dinghy, and I was alone: floating face-down, staring into the luminous green sea.

My first impression came as a total surprise.  I found to my amazement that, because of all the layers of clothing I was wearing under my dry-suit, this freezing Arctic fjord felt like being in a warm bath.  And as I floated there, I had a sudden insight into what it’s actually like to be a whale or a seal.  You’re buoyed up by this beautiful green water, and with all your layers of blubber you’re beautifully warm, and moving about is so easy!  No wonder they like playing!  This was when I truly began to understand what it’s like for Torak when he spirit walks in the seal.  And this is why I go on research trips: because so often, they reveal things which I couldn’t possibly have imagined if I’d stayed at home.

But as I floated there, I still couldn’t actually see anything; just beautiful, green water.  Oh well, I thought, stifling my disappointment.  At least I can hear them: a magical whistling and clicking, as they talked to each other in their mysterious, underwater whale talk.

Then – just as I’d given up hope – a huge male killer whale swam directly beneath me.  He was only about twenty feet down, so I could clearly see his big black dorsal fin, and his black-and-white markings.  I didn’t have time to be scared.  Besides, he was ignoring me – although I could tell that he knew I was there, because I could hear him clicking: checking me out by echolocation.

My overriding impression was of how fast he was going: faster than an outboard motor.  He was powering past me at incredible speed.  It only lasted a few seconds – and then he was gone.  But I’ll never forget it.  I felt so privileged to be sharing his Sea with him, even for a little while.  And just like Torak and the Seal Clan, I felt such awe, such respect, for these magnificent creatures.