Queen Of The Stone Age

Queen Of The Stone Age

Michelle is interviewed by Stephen Moss for The G2 section of The Guardian. 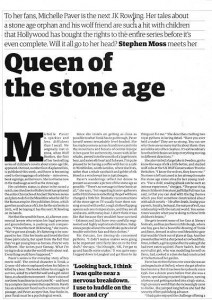 Michelle Paver is sparkier and less diffident than I recall. We originally met in 2004, when Wolf Brother, the first of her bestselling series of children’s novels about stone-age life, appeared. Outcast, number four of a planned six, is published this week, and Paver is becoming used to the trappings of celebrity – interviews, book signings, author tours. She is at home now in the media age as well as the stone age.

Her celebrity status is about to be raised a notch, too: the director Ridley Scott has optioned the entire Chronicles of Ancient Darkness series and plans to do for the Mesolithic what he did for the Roman empire. Her publisher, Orion, which gave her an advance of £1.8m for the six books in 2003, will be hoping it has the next JK Rowling on its hands.

Not that the sensible Paver, 47, a former commercial lawyer who retains her legal precision and groundedness, is pushing such comparisons. “I’m not the next JK Rowling,” she insists. “We’ve got one already. It’s flattering to be compared to her. I like her books and loved the first three particularly, but apart from the fact that they’ve got young boys as heroes, they’re very different. She writes pure fantasy. What I’m trying to do is make the world I write about real. Everything could have happened.”

Paver’s series is the everyday story of boy meets wolf. The central character is Torak, a 12-year-old who is orphaned when his father is killed by a bear. The books follow his struggle to survive, aided by a faithful wolf and a girl called Renn, in a hostile environment – Paver’s vision of northern Scandinavia circa 6,000 BC – and faced by a complex clan system that rejects him. Rarely has an adolescent faced such a tortuous rite of passage, and Paver accepts that, four books in, poor Torak must be a psychological wreck. 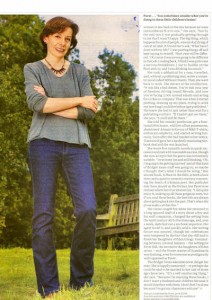 Since she insists on getting as close as possible to what Torak has to go through, Paver herself seems remarkably level-headed. She has made journeys across Scandinavia and into the mountains and forests of central Europe in her quest for authenticity, swum with killer whales, peered into the mouth of a large brown bear, and eaten elk heart and fish eyes. I’m quite pleased to be having a coffee with her in a cafe in Wimbledon, south London, where she lives, rather than a whale sandwich and goblet of elk blood in a windswept bar in Spitzbergen.

Paver’s wanderings reflect her desire to present as accurate a picture of the stone age as possible. “There’s no message in these books at all,” she says, “but regarding hunter-gatherers as the Flintstones is something I hope I will have changed a little bit. Dramatic reconstructions of the stone age on TV usually have them running around with awful, rough clothes flapping open in sub-zero temperatures, and they are all unshaven, with messy hair. I don’t think it was like that because they wouldn’t have survived – Eskimos and Inuit have very carefully engineered and highly sophisticated clothes. Indigenous people all over the world take quite a lot of trouble with their hair and their clothes.”

For Outcast, her derring-do concerned pythons. “I didn’t realise snakes were going to be important until fairly late on in the first draft,” she says. “So I thought, ‘OK, I’ve got to go and handle some snakes.’ It was quite easy: I nipped down to Longleat and got them to lay things on for me.” She describes cradling two royal pythons in loving detail. “Have you ever held a snake? They are so strong. You can see why there are so many myths about them: they are unlike any other creature. It’s extraordinary how that little brain can keep everything moving in different directions.”

She also visited a large lake in Sweden, got to know the ways of elk a little better, and studied wolf cubs at the UK Wolf Conservation Trust in Berkshire. “I know the wolves, they know me.” No stone is left unturned in her attempt to make the stone age come alive for her young readers. “For a child, reading a book can be such an intense experience,” she says. “The great thing about children’s literature, as Philip Pullman has said, is that you can deal with the big themes which you feel somehow constrained about with adult novels – life after death, losing your parents, loyalty, betrayal, the nature of evil, our relationship with the natural world. You sometimes wonder what you’re doing to these little children’s brains.”

She gets to meet some of her fans at literary festivals, and has just been in Edinburgh, where one boy gave her a beautiful drawing of Torak and Renn, dressed in ultra-cool Mesolithic gear that wouldn’t look out of place at Gap. Another presented her with a sharpened arrowhead flint. Once, in Bath, a girl surprised her by asking if she had ever eaten squirrel. Paver hadn’t, but the survivalist girl, who was modelling herself on Renn, had, cooked in a den she had constructed at the bottom of her garden.

Paver has written fiction ever since she was an undergraduate at Oxford, where she got a first in biochemistry. But it has been her job only since 1996. For a dozen years before that she was a lawyer, specialising in patent litigation, earning a fortune and getting sucked into a high-status, high-pressure world that she increasingly came to dislike. She jumped long before she had the security of her publishing advance.

“I had quite enjoyed the challenge of being a woman in law back in the 80s because we were outnumbered five to one,” she says, “but by the mid-90s it was gradually getting through to me that I wasn’t happy. The big thing, which happens for a lot of people, was my dad dying of cancer in 1996. It forced me to ask, ‘What have I done with my life?’ I was putting things off and kept saying to myself, ‘Next year will be different.’ Of course it was never going to be different in that job. Looking back, I think I was quite near a nervous breakdown. I use to huddle on the floor and cry, and I was drinking too much.”

She took a sabbatical for a year, travelled, and, without a publishing deal, wrote a romantic novel called Without Charity. Then she went back to work. She shivers at the recollection. “It was like a bad dream. You’ve had your year of freedom driving round Nevada, and now you’re facing 3,000 unread emails and acting for a tobacco company. That was when I started plotting, drawing up my plans, trying to work out how long I could live before I got published.” She knew she had to quit rather than wait for a publishing contract. “If I hadn’t got out then,” she says, “I could still be there.”

She sold her swanky penthouse, got a functional little house, sold lots of her possessions, abandoned Armani in favour of M&S T-shirts, embraced simplicity, and started writing furiously. Soon after she had handed in her notice, Transworld gave her a modestly reassuring two-book deal and she was launched.

She wrote five romantic novels in quick succession and met with reasonable success, though she now accepts that the genre was not entirely suitable. “I was in my 30s and still thinking, ‘Oh, I’m going to be getting married’ and all that kind of Bridget Jones stuff was going on, so maybe I thought that’s what I should be doing.” Her second book, A Place in the Hills, is both a love story and a quest to unravel a mystery concerning the death of a Roman poet. Her publisher may have played up the former, but Paver now realises where her true interest lay. “I did quite enjoy it, making up all these gorgeous men, but if you read those books, the best bits are always about getting back into the past. That’s when the prose really catches fire.”

Her career caught fire when she returned to a long-ignored draft of a story about a boy and his wolf companion, changed the setting from the ninth century AD to the stone age, and, over a week, sketched out a six-book sequence. Her agent loved it, and quickly sold it. Her writing future was assured, though her celebrations were tempered by the fact that she still had to finish her Daughters of Eden trilogy. Commuting between colonial Jamaica – the setting for Fever Hill, the second in the Daughters of Eden series – and the frozen wastes of Scandinavia was draining, even for someone as prodigiously well organised as Paver.

The Bridget Jones wannabe never did get her man. She is happily unmarried – or perhaps she could be said to be married to her cast of stone age characters. “It’s a self-reinforcing thing,” she says. “Because I’m enjoying these books, I don’t want a husband and children because it would interfere with them. I don’t feel I’m alone because I’ve got my characters with me”.