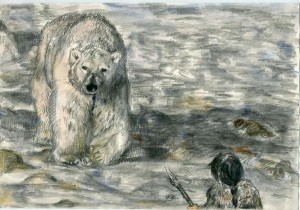 Picture by GrayWolvexxX from The Clan

For research, I spent time in north-east Greenland in winter, where I experienced at first hand the power of wind and snow, watched glaciers calving and icebergs crashing into each other, and took several husky sled trips Greenland-style (racing as fast as the dogs could go over hills, frozen lakes, anything in their path). 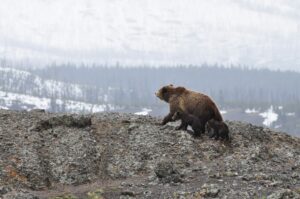 To experience the forest in winter, I hiked in the foothills of the Carpathian Mountains in Transylvania (Romania), and found the tracks of badger, weasel, red deer, roe deer, wild boar, lynx, and wolf (the bears were still hibernating).

In Transylvania, too, I learned from my guide, a wolf and raven researcher, how to fake a wolf kill so as to attract ravens  which proved useful in the story. 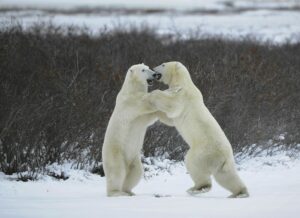 In southern Greenland in summer I caught my first sight of a polar bear. I was hiking alone, an hour’s walk from the tiny settlement where I’d been staying, when I saw the unmistakable white shape of a polar bear in the distance. Luckily I was downwind, and made a hasty retreat to the settlement before the bear caught my scent; but I’ll never forget the heart-lurching moment when I spotted that long white neck stretching upwards to snuff the wind. 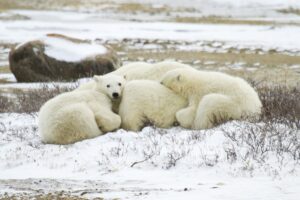 Hanging around outside Churchill, waiting for  Hudson Bay to freeze

As polar bears would be important in the story, I went to the small settlement of Churchill, Manitoba (northern Canada) in winter to watch them under slightly less perilous conditions. In early winter, polar bears gather on the tundra around Churchill, waiting for Hudson Bay to freeze over, so they can go and hunt seal. From a tundra buggy (like a large truck with an outside, open-air viewing platform), I watched wild polar bears by night and day, and got nose-to-nose with several through the grille of the platform. I’ll never forget the haunting feeling of gazing into those dark, strangely innocent eyes.

I also studied traditional Inuit and Sami (Lapp) methods of cold-weather survival in Greenland, Finnish Lapland, and North Norway, to gain insights into how Torak’s people lived: including their cold-weather clothing made of reindeer and seal hide and birdskin (I now keep a pair of Inuit reindeer-hide gauntlets in my freezer; it’s the best place to store them, as otherwise they shed) ; and Inuit seal-hunting techniques and whole-carcass usage (which involved my sampling raw seal liver in southern Greenland; it’s still traditional in some areas to taste a bit of the seal as soon as the animal has been killed).