A Swim In The Fjord With Killer Whales 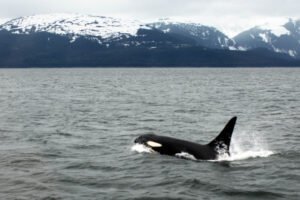 Fancy a dip with a pod of Orca? Michelle did, to research Spirit Walker

To get ideas for what the Seal Islands might be like, I went to the Lofoten Islands of north Norway, and stayed in a rorbu (a fisherman’s hut built on stilts over the water). 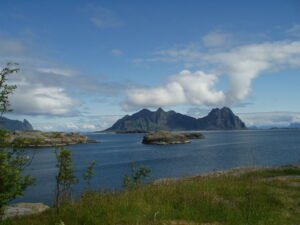 The Lofoten Islands in summer

I was there at the time of the midnight sun (when the story takes place), and spent several days roaming the hills and beaches, travelling the sea by small boat, and imagining Torak and his friends there too. 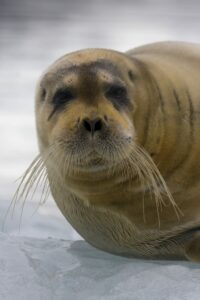 A Bearded Seal… very cute, unless you happen to be a cod

I saw white-tailed sea-eagles wheeling above the cliffs, and hiked at midnight (in the blazing sun) to a cave containing 5,000-year-old rock paintings.

In Trømsø, north Norway, I studied five delightful bearded seals, and learned from the researchers who look after them what it’s like to be a seal.

I also traveled to Greenland, to learn how the Inuit people traditionally built and handled kayaks, hunted seals, and made their clothes, weapons and shelters out of whale-bone, seal-hide and birdskin. 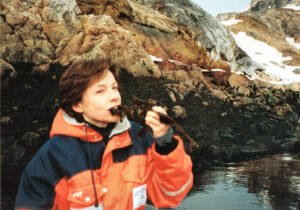 Me, getting stuck into some very fresh seaweed, scooped off the rocks by my Inuit guide, Inogi

I discovered that hiking alone in Greenland can be scary – as when I saw a polar bear in the distance, and made a dignified retreat.

I learned from a Greenlandic girl that Torak means “perfect” in Greenlandic.

I ate some of the Inuit food: raw whale blubber, seal (including raw seal liver and blubber), seaweed, and fish eyes. Some of it didn’t taste too good (at least to me), but it’s what Torak eats in the book, so I had to try it. (NB: the Greenlandic and Danish Governments are strict about conservation, and Greenlanders respect what they eat, and don’t waste any part of a kill. For these reasons I thought it appropriate to sample these foods.) 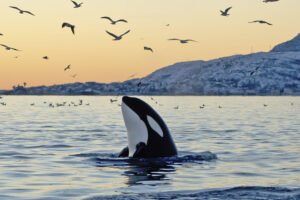 Feeding time for orca – and hundred of seagulls, too

In November, I traveled to the remote region of Tysfjord in north Norway to study the killer whales who congregate here in extraordinary numbers to feed on the herring. I witnessed close up the killer whales’ unique “carousel” mode of feeding on the herring – accompanied by a screaming tumult of white-tailed eagles and gulls.

I also swam with the killer whales in the fjord.  I admit I was a bit apprehensive beforehand, but as Torak was going to do it, I thought I should too.  I’ll never forget the feeling of snorkeling in a dry-suit in the second deepest fjord in Norway (900m of water beneath me!), with one of the world’s top predators feeding a few feet away. I could clearly hear the killer whales whistling and clicking to each other underwater – and the highlight was when I saw a huge male killer whale swimming at incredible speed about 20 feet below me. Luckily, he was far more interested in the herring than in me.

Also in Tysfjord, I clambered up the rocks to study the Dyreberget, or Animal Rock: a fantastically atmospheric collection of ancient rock carvings (said to be 9000 years old, although no-one really knows) – which gave me the inspiration for the Crag in the book!