The world of Wolf Brother is strange, unfamiliar, beautiful, exciting – but above all, it’s real 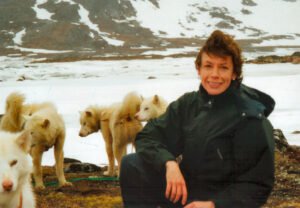 Taking a breather with the huskies in an Arctic gale Kulusuk, East Greenland

I want the reader to feel that they’re right there with Torak and Wolf.

And that means research.

However, it’s vital not to include too much in the stories, so I’m careful only to put in a tiny part of what I’ve learned: maybe as little as 1%.  The challenge is to put in just enough to make the reader feel they’re there, without clogging up the story.

For Wolf Brother, I rode a total of 300 miles in the forests of north-eastern Finland and northern Lapland. Among other things:-

At times, some of this research was very far from comfortable, but even the uncomfortable bits – for example, getting freezing hands and feet on one dismal, sleety ride in Lapland – were crucial, because they impressed on me the importance of keeping my hero warm and dry!