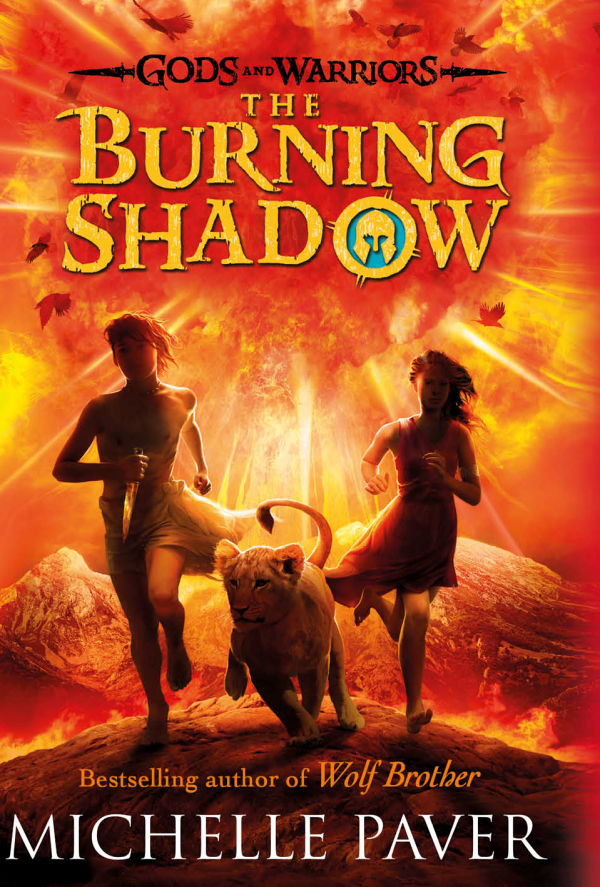 A boy on the run.

A race against time.

Hylas the Outsider is captured by slavers. Set to work in the terrible underground mines of Thalakrea, he learns to his horror that he’s now closer than ever to his murderous enemies, the Crows. He has to escape before they find out he’s here.

Pirra, the daughter of the High Priestess, is also on the run. When Fate reunites her with Hylas, their survival depends on ancient magic and an orphaned lion cub – unless the Gods have other plans…

The Burning Shadow is the second book in Michelle’s Gods & Warriors series.

I’d always wanted to write about volcanoes, so I had fun exploring the fiery islands off Sicily. It’s such a weird feeling to kneel on the flank of a volcano and peer into a fumarole: a spitting, sputtering hole that’s crusted with bright yellow sulphur and spurting foul-smelling smoke. It really makes you aware of the unimaginable heat at the centre of the earth.

Cooled lava forms obsidian, a black, glossy volcanic glass. If you hit obsidian with a stone, it splinters with such sharp edges that it’s still used in surgical tools today. In Hylas and Pirra’s time, people used obsidian for making knives, axes and arrowheads; and on one island, I found a whole hillside covered in heaps of obsidian, where Bronze Age weapon-makers had chipped away at it for thousands of years. I had a go at smashing a lump of obsidian myself, – and bashed my thumb instead, sending blood spurting all over my shirt!

But it was even more fun to introduce Havoc the lion, who’s such an important part of Hylas’ story. When we first meet her, she’s a very small, frightened cub – and yet I was astonished at how her character came through loud and clear in her very first scene.